Learn how the COVID-19 pandemic affected recycling trends and better understand how to recycle properly and reduce waste. This guide provides beneficial information for seasoned recyclers and beginners alike.

COVID-19 reached the United States over a year ago. In the early days of the pandemic, most of the country was in lockdown. Politicians and activists eagerly seized the opportunity to implement reform on single-use plastics. New laws were introduced to limit the usage of these plastics, most of which are not recyclable and contribute to climate change.

Although over 95 single-use plastic bills introduced by state lawmakers in 2019, directly before the COVID-19 pandemic, lockdown was still a major a catalyst in the decline of recycling efforts. The driving forces behind this are multifaceted. First, the pandemic caused increased usage of single-use plastics for personal protective gear. Safety concerns contributed to a 40% increase in demand for plastic food packaging, disposable plastic bags, and other products to avoid contamination. Secondly, because the pandemic caused a massive decrease in fuel demand, many oil companies began to rely on the consumption of plastic-based consumer goods and PPE (manufactured using natural gas) to make up for lost revenue.

Large companies like ExxonMobil are now navigating how to simultaneously meet increased demand for single-use plastics and invest in more environmentally sustainable products. While single-use plastics have certainly helped mitigate the spread of COVID-19, potentially saving thousands of lives, the increased demand for these non-recyclable items have stalled the adoption and expansion of recycling in American homes. 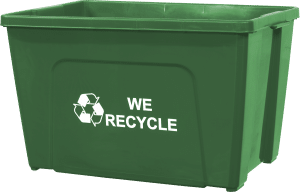 A 2019 Covanta Survey of 2,000 Americans found that 62% of respondents reported concern that they recycle improperly due to lack of knowledge. Additionally, the survey found that 41% of respondents struggle to afford eco-friendly products.

“While done with good intentions, many Americans are practicing aspirational recycling—tossing things into recycling bins that they think should be recycled, rather than what can be recycled,” said Paul Gilman, chief sustainability officer at Covanta, in a statement. “This practice has led to the contamination of recyclables and a crisis in the market.”

To combat “aspirational recycling,” Americans must have access to resources detailing local guidelines and rules. These can vary vastly by jurisdiction, so make sure to check what policies govern the recycling process in your region by visiting your local government’s website or by finding your state in this comprehensive list by Waste Dive.

To better understand hurdles the United States faces when it comes to effective recycling, we asked SSI SCHAEFER waste and recycling expert Mark Cerniglia to explain the situation in more detail.

"Over the years, recycling has been practiced with much effort and participation from communities across the United States with the thought that anything dry should or could go into the recycling cart. Communities often think that something should or could be recycled when it is actually not recyclable due to its Life Cycle Assessment, resulting in residue (waste) at the MRF.  This practice of depositing what is thought to be recyclable based on a wide or broad spectrum of recyclables collected by the municipality or hauling contractor actually degrades their commodity and creates more waste to be disposed of at the MRF - resulting in increased costs.

Education is the key to the success of any diversion program whether it's food waste, organics/green waste, or recyclables.  This education starts at the schools and homes so we don’t pollute or contaminate our recyclables.  This practice increases profitable returns for the processors which are passed down to the consumer - keeping our disposal costs down."

As the world slowly returns to pre-pandemic operations, there are plenty of changes individuals are making to minimize the use of non-recyclable materials and opt for more eco-friendly alternatives.

If you haven’t done so already, this may be the best place to start. Here’s a quick refresh on how to recycle properly.

Despite varying policies based on location, there are general guidelines for recycling set by the EPA. The following list consists of items that are commonly recyclable:

So, what about items that should not be recycled? The following list summarizes items that most likely won’t be accepted in your recycling bin. 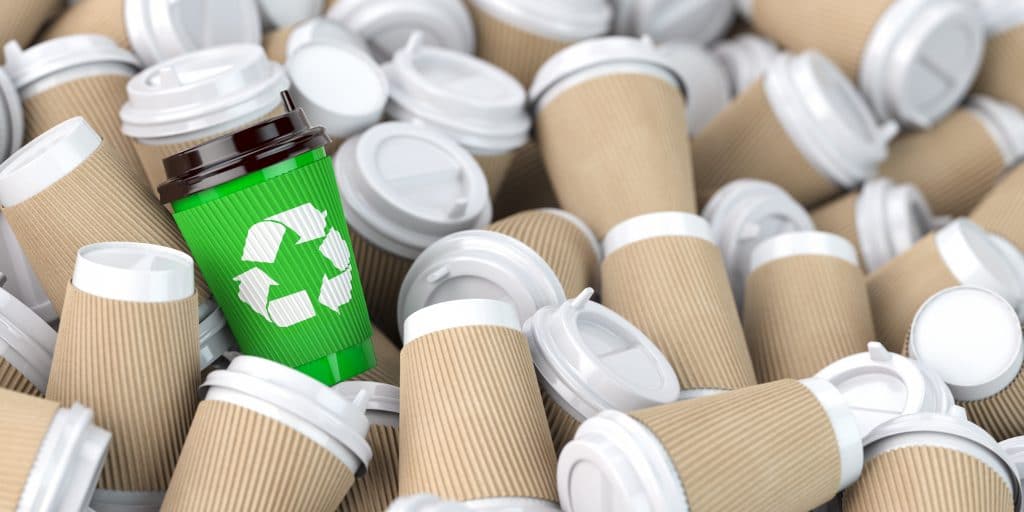 SSI SCHAEFER is continually focused on creating sustainable products and investing in the fight against climate change. Our recycling carts are made of HDPE (High Density Polyethylene), one of the most eco-friendly plastic solutions in manufacturing. HDPE is a Type 2 plastic and many products like SSI SCHAEFER recycling carts are made with post-consumer product material and 100% recyclable. Known for being lightweight, durable, and impact resistant, many HDPE containers are recyclable after use. Additionally, SSI SCHAEFER publicly committed to remaining a dedicated partner in the fight against climate change by joining the 50 Sustainability and Climate Leaders initiative. A response from the international business community, this program takes action to meet the United Nations 17 Sustainable Development Goals, advancing the development of sustainable and economical logistics solutions.

"SSI SCHAEFER is an ideal partner for companies that pursue economical, future-oriented, and sustainable goals. We have a broad portfolio of innovative products and solutions, which we combine together for specific needs of each customer."

Join SSI SCHAEFER in the effort to reduce waste, increase recycling, and protect the environment. Browse our recycling products below to learn more!

Additionally, get more information on sustainable efforts and products from SSI SCHAEFER by visiting the Sustainable Solutions page on ssi-schaefer.com 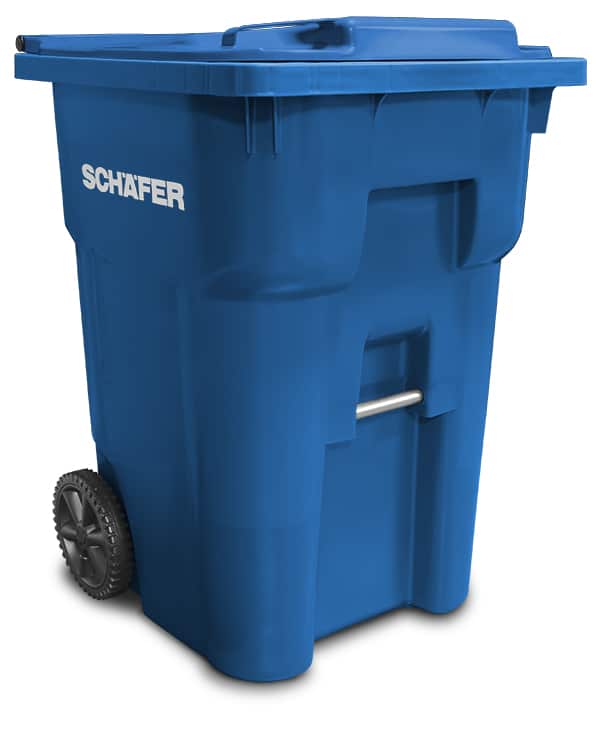 The SSI SCHAEFER Q-Series line of recycling carts helps municipalities and haulers save money and the environment. With 793 waste carts per 53’ truckload, Q-Series waste and recycling carts minimize environmental footprints with more cargo per load. Additionally, these carts are made with HDPE (High Density Polyethylene) and are 100% recyclable.

The M-Series line from SSI SCHAEFER is used by millions of residences throughout the United States. Made with one-piece HDPE construction and featuring standard semi-automated tippers, customers can easily roll their carts to the curb for a no-sweat recycling routine. 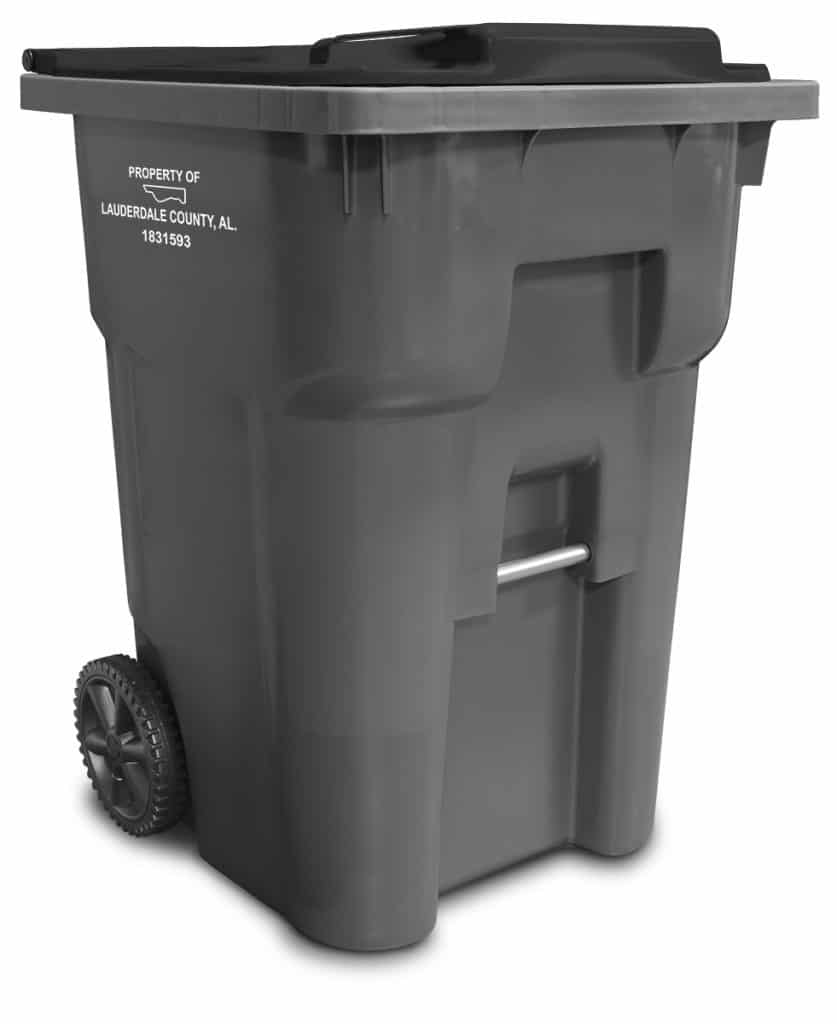 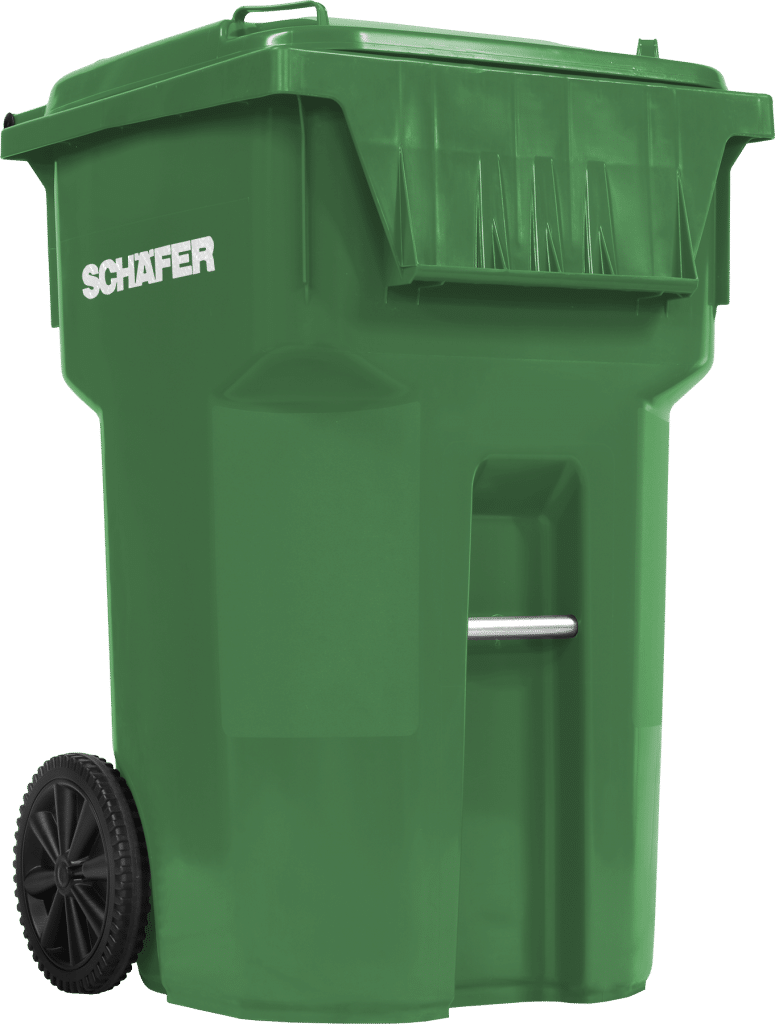 The B-Series cart can be used with semi-automated tippers or fully automated grabbers. With versatility and HDPE durability, these recycling carts additionally feature an in-molded toe for easy tilting and easy recycling. 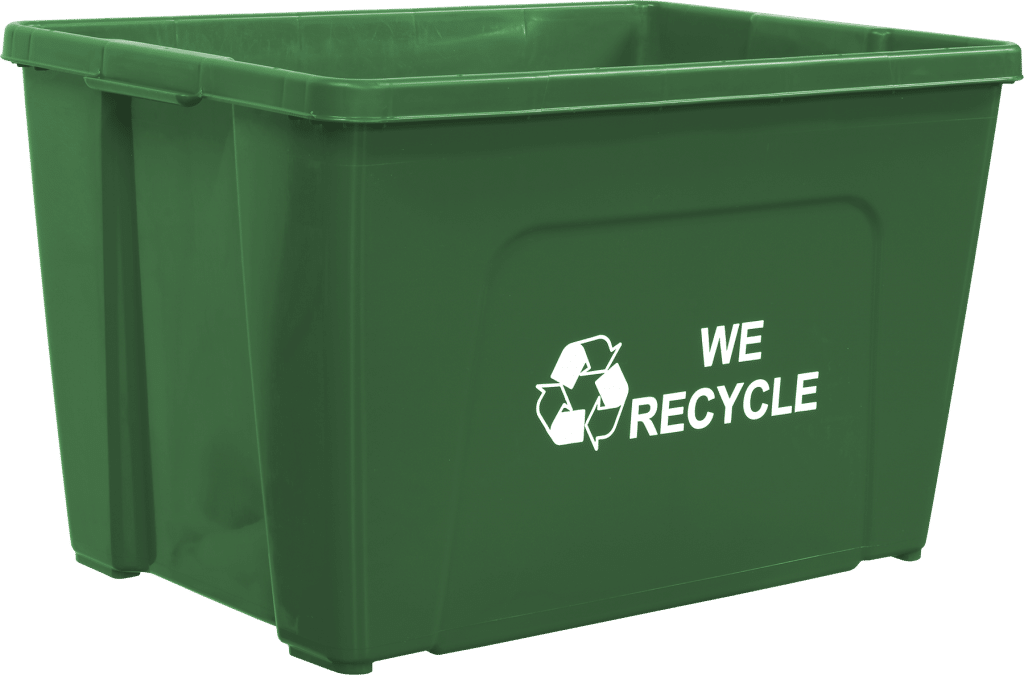 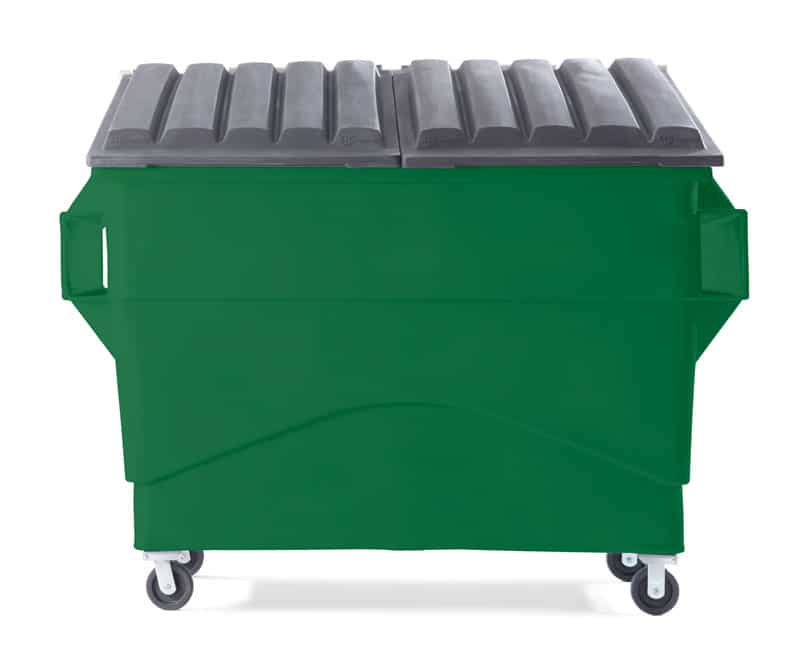 Now more than ever, commercial businesses have a great opportunity to make a positive impact on reducing waste. With SSI SCHAEFER commercial waste and recycling carts, businesses can rely on manufacturing integrity and product durability.

Guaranteed to resist leakage, rust, and bottom replacement, SSI SCHAEFER commercial waste and recycling carts are not only suitable for recyclable materials, but also are ideal for food and organic waste collection. Featuring a tight seal for safe use in environmentally sensitive areas, these recycling carts come in a range of sizes and are 100% recyclable.

Interested in learning more about recycling products and services from SSI SCHAEFER?

Contact us to speak with a waste and recycling expert. For faster service, call 855-900-CART.

PrevPreviousChallenges for Cities without Waste Automation
NextWaste Expo 2022Next
All 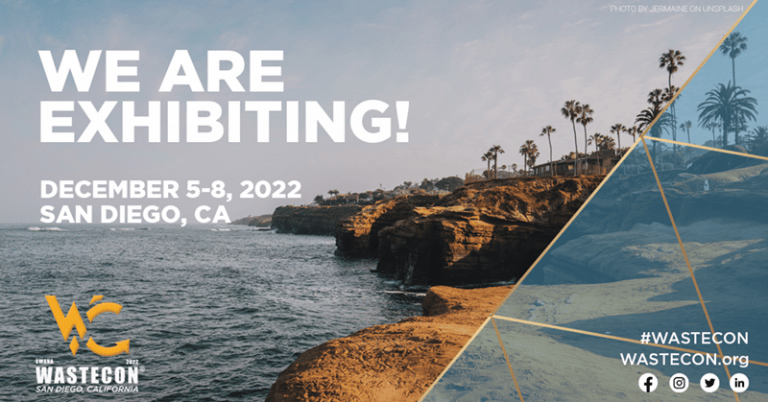 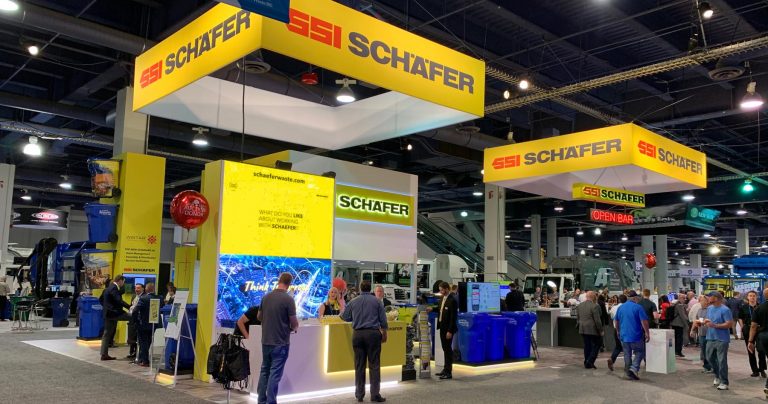 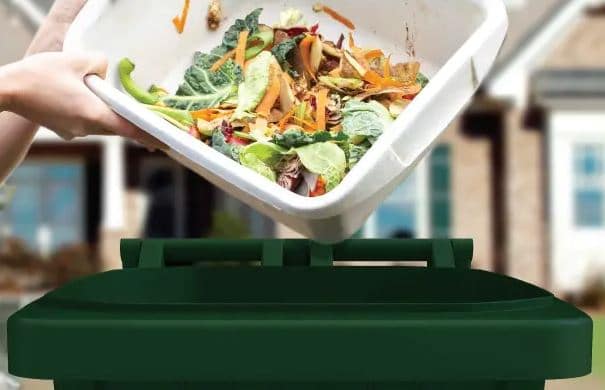